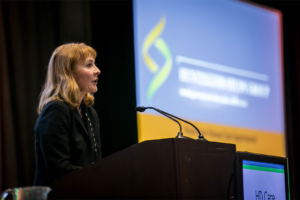 Not only was the elevation a ‘mile high” at the HSG 2017 conference, which was held in Denver, Colorado, in November, but emotions also soared—with excitement about the rapid progress of Huntington disease (HD) research.

The 24th annual meeting of the Huntington Study Group brought together scientists, clinicians, health practitioners, company representatives, caregivers, and patients, among many others from around the world to learn about and discuss the latest advances in HD research and treatments.

“No other biomarker has shown such a strong association with HD.”

Of note was Dr. Lauren Byrne’s and Dr. Ed Wild’s discussion of their work on a neuroﬁlament light protein (NfL) as a potential prognostic marker of neurodegeneration in HD patients. They found that mean concentrations of NfL in blood plasma at baseline were signiﬁcantly higher in HTT mutation carriers than in controls, and the difference increased with disease stage. “No other biomarker has shown such a strong association with HD,” said Byrne, research assistant at UCL Institute of Neurology. Wild is a clinician scientist at the institute.

Dr. Jody Corey-Bloom, neurologist at UC San Diego Health, discussed a different type of biomarker, one that could simply and safely detect HD: saliva. Her group has found that the huntingtin (Htt) protein can be detected in salivary samples. “Overall, measurements of salivary Htt appear to offer signiﬁcant promise as relevant, non-invasive biomarkers for HD,” she said.

Regarding treatments for HD, Dr. Sarah Tabrizi, professor of clinical neurology at UCL Institute of Neurology, spoke about IONIS-HTTRx, an antisense oligonucleotide (ASO), which she and her team found successfully and safely lowers the mutant huntingtin protein (mHTT) in people with HD. In mice, it improves phenotype and survival. The researchers began their human trials in 2015 and expect to publish their results in 2018.

Dr. Amber Southwell, assistant professor at the University of Central Florida, discussed another potential ASO therapy. Her team’s ASO prevents the onset of HD in pre-symptomatic mice and enables post-symptomatic mice to recover their motor and psychiatric phenotypes. 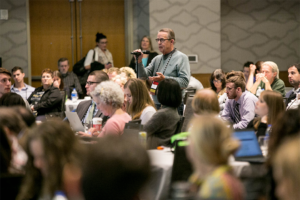 Dr. Davina Hensman Moss, clinical research fellow at UCL Institute of Neurology, spoke about her research on genetic modiﬁers of HD, including genes whose locations on DNA may inﬂuence the age of onset of HD. She hopes this basic research will provide knowledge with which to develop drugs to treat the disease.

Toward the end of the meeting, journalist Charles Sabine brought the audience to tears when he showed his documentary video of his HDdennomore initiative in which he brought HD patients from Latin America to Rome to hear Pope Francis publicly acknowledge the disease.

It was a fitting way to end the conference—full of hope for a new future. Indeed, attendees left feeling inspired to continue their work and to implement the many new ideas that came to them throughout the course of the meeting.