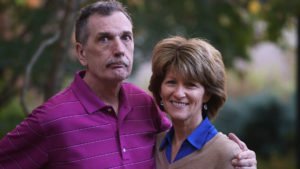 Early on in their relationship, Ann and David Nelson decided they would prepare as if Dave had the Huntington disease (HD) gene, but they would live as if he didn’t.

“Our friends used to say, don’t go on vacation with Ann and Dave because you’ll never get rest,” Ann joked.

And they planned. David changed his focus after medical school from neurosurgery to neuroradiology, lessening risk to patients, should he develop the disease. After a decade of marriage, they adopted a daughter, Claire, from China, instead of having biological children. Just in case. Three years later, they adopted Audrey.

It was about then that Ann started seeing signs of HD in her loving husband. She saw twitches in his fingers she never noticed before. At a family reunion, he stayed back in their condo the whole time. He didn’t want to be around the bustle and noise of the family. And he became irritable, a big change from his usually exceedingly agreeable personality.

Dave started complaining that his coworkers were out to get him. At first Ann was angry with them. Why would they be so awful to the hard-working 20-year veteran?

“In hindsight, they weren’t,” Ann said. “They saw changes that I wasn’t ready to accept.”

It got tougher for Dave to concentrate at work and his productivity declined. He had several negative interactions with his coworkers. In April 2007, he was given a choice: Resign or quit. Dave resigned and tried other, slower-paced jobs, but he just couldn’t keep up. Halfway through 2008, Dave stopped working all together.

The next five years of transition were difficult for the family. They had to adjust to having no income and with each new symptom or symptom progression, it forced the family through the cycles of grief again. Dave, like many people with HD, spent money he didn’t have. Once he bought a sports car, putting $20,000 on a credit card. He couldn’t even drive it home.

“That is part of God’s grace in this disease, and you have to embrace that and just move on,” Ann said.

The family has adjusted to their new reality. Routine is important, and after a terrifying incident at a New York City airport several years ago, Dave is judicious about taking his medication and seems content.

“He has let the cares of this world, fall away. In some ways, people who are able to do that, are lucky,” Ann said. “He’s not worried about being cared for. I’m here. We’re going to make it.”

Ann doesn’t dwell on what Dave has lost either. Dave isn’t in any pain, and for that she is grateful. When they were younger and so busy, Ann felt she didn’t slow down and enjoy the simple pleasures of life. She’s thankful she has the time with her husband to do that now, and she sets aside time to do that for herself too. She’s very active in her church, tapping into her faith for strength, and spending time with friends giving and getting support.

“I’m not chasing after the materialistic things that I used to,” Ann said. “There’s a richness to my life now that wasn’t there before.”

And she’s teaching those life principles to their daughters. Patience, love, empathy, always being there for your loved one.

March 16, 2017 0
I am the DIFFERENCE By the time Chris O’Brien was born, his mother was already showing signs of Huntington disease…
Previous Post
Next Post