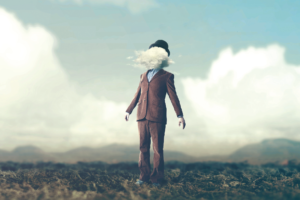 Lauren Steffan was just a girl when her mother began to have episodes of uncontrollable anger. “I remember a time when she completely destroyed the house; she was throwing things and tearing up old photos and journals,” says Steffan. “I thought it was normal for my mom to lose her cool, but now I know that her anger was related to her Huntington disease.”

Steffan herself tested positive for Huntington disease (HD) in 2016 at the age of 28. “When you face a diagnosis of HD, your mind goes to dark places,” she says. “Once you find out you have the disease, it’s hard not to be irritable.”

Indeed, receiving a diagnosis of HD causes a range of extreme emotions, and rightfully so. “There is a lot to be angry about in Huntington disease,” says Karen Anderson, associate professor of neurology and psychiatry at Georgetown University Medical School. “People have often grown up seeing their parents or other family members affected by HD, and they know what’s coming for them; they know it’s a debilitating illness.”

And yet, as the disease progresses, much of the irritability associated with HD is due to biological changes that take place in the brain.

“There is a clear neurodegenerative basis for profound behavioral changes among HD patients,” says Steven Hersch, professor of neurology at Harvard Medical School and senior director for clinical development at Voyager Therapeutics who is collaborating with Azevan on its HD clinical trial. “The incidences of irritability and behavioral dyscontrol are just so high among these individuals.”

Characterized by poorly controlled anger and often elements of verbal or physical aggression, irritability affects about half of patients with HD and is a significant source of distress for patients and their caregivers. Often patients behave normally most of the time, with irritability occurring in intermittent bursts.

A new drug developed by Azevan Pharmaceuticals could help to alleviate symptoms of irritability among HD patients. Called SRX246, the drug has been shown in preclinical studies to reduce aggression and fear responses, both of which are part of human irritability. The drug also produces antidepressant and anti-anxiety effects in animal models.

Vasopressin in the Brain

“There is a long history of recognition of a relationship between the effect of vasopressin in the central nervous system and the expression of aggressive behavior,” says Michael Brownstein, senior vice president for drug development at Azevan Pharmaceuticals. “Elevated vasopressin is strongly associated with increased levels of aggression. In our preclinical studies in mice, we showed that SRX246 blunted aggressive behavior markedly.

The Azevan team also used functional magnetic resonance imaging (fMRI) to observe the changes taking place in the rats’ brains in response to SRX246. That study involved housing a male and female rat together until they bonded. The male was placed in an MRI scanner, was able to see and smell his mate, and then a strange male rat was put into the cage with the female. “When we added a strange male, the MRI showed a significant increase in activity in circuits involved in aggression in the original resident,” said Brownstein. “If the males were treated with SRX246, those changes were blocked.”

While the drug proved to be successful in animal models, its administration for use in the brain wasn’t so easy. “Exploiting the vasopressin system as a target for CNS disorders was problematic because previously available vasopressin antagonists did not cross the blood-brain barrier after oral administration,” says Neal Simon, CEO of Azevan. “We eventually solved the problem through a combination of good luck and good chemistry. Our vasopressin antagonists, including SRX246, are very specific in their action on the vasopressin V1a receptor. Consequently, we don’t expect them to have significant side effects.”

The researchers then proceeded to conduct an imaging study with healthy human volunteers. “We found that the drug lowered the effect of vasopressin on brain circuits that were activated in response to pictures of angry or threatening faces, a standard protocol for eliciting emotional responses,” says Brownstein. “These experimental medicine results, in particular, enabled us to attract additional funding to continue development of the compound.”

One source of the team’s additional funding came from the National Institute of Neurological Disorders and Stroke’s (NINDS’s) Network for Excellence in Neuroscience Clinical Trials (NeuroNEXT). According to Walter Koroshetz, director of the NINDS, “the goal of NeuroNEXT is to facilitate the rapid development and implementation of promising new treatments for people with neurological disorders.”

“NeuroNEXT focuses on supporting biomarker-informed phase II trials in humans, which are trials that have built into them what we call ‘go/no go’ criteria,” says Koroshetz. “In other words, you don’t go on to the expensive phase III trial unless you see what is predicted in the phase II trial.”

Koroshetz has firsthand knowledge of the importance of undertaking careful phase II trials. As an expert in HD, Koroshetz spent his research career prior to working at NINDS investigating the nature of the cell death that occurs in the brains of HD patients. Specifically, he studied the ability of coenzyme Q10 to lower lactic acid in the brain. It turned out that one of the Huntington Study Group team’s trials that he was involved with showed a trend toward benefit of coenzyme Q10, although non-significant; another trial showed nothing. “It’s pretty clear that we jumped into the phase III clinical trial without the kind of evidence we needed,” he says. “All the pieces of the puzzle were not in place.”

Koroshetz believes that NeuroNEXT’s emphasis on requiring phase II trials to be conducted in a rigorous, systematic fashion across multiple centers makes projects more successful down the road. He notes that SRX246 was considered by the study section to be a good candidate for NeuroNEXT support because it already had demonstrated efficacy and lent itself well to the network’s format.

The Azevan Pharmaceuticals team received funding from NeuroNEXT in September, 2015, and enrolled the first of 106 patients beginning in June 2016. The study was conducted at 22 locations across the United States. “Spreading the study sites across the United States is important,” says Anderson, who helped to design the study, because it reduces the potential for bias. “You don’t have one particular investigator enrolling subjects who may assess a patient’s irritability and aggression in a certain way.”

Everyone involved in SRX246, from the researchers to the funding agency to the patients, are hoping for positive results and rapid progress to approval. “Currently, people with HD who have irritability that interferes with their well-being have limited options for treatment,” says Koroshetz.

Anderson notes that HD patients often are prescribed drugs that were originally approved for psychosis, schizophrenia, and bipolar disorder. “These drugs have not been tested in a careful way to see if they actually work for people with HD and to characterize their side effects,” she says. “There is a black-box warning for antipsychotic medications because of the risk of cardiovascular issues, strokes, and even death. We know there is a potential for really serious side effects with these drugs, but when the family is calling you at 10:00 at night on a Saturday because someone is tearing up the house you have to do something to help them.”

Anderson remembers a particular patient who was a manager at the company where he worked. “He had people skills and interacted well with others,” she says, “but he became increasingly difficult to deal with at work because he was irritable. He began to feel that all of his employees were lazy and weren’t listening to him. He would throw the stapler or kick the trashcan across the office if someone brought him bad news on a project. Eventually, he had to stop working, which made things worse for his wife and two small children because he was home more often. Once, one of his kids left his bike outside in the rain. My patient was so angry, he ran over the bike with his truck. It’s difficult for everyone when those kinds of things happen.”

As HD progresses, it affects many parts of the brain, including the frontal lobe, which is responsible for putting the breaks on our behaviors and getting us to think about the consequences of our actions, explains Anderson. “In the case of Huntington disease, the brakes are off and you just act on impulses; unfortunately a lot of those responses are aggressive and angry,” she says.

Anderson notes that not everyone with HD has symptoms of irritability, but when they do occur they can be very serious. Indeed, a safe, well-tested drug to reduce irritability is greatly needed in the HD community.

“When you experience firsthand the courage of the patients and their family members, you become really attached to trying to do something that can make a big difference in this disease,” says Koroshetz.

Looking to the Future

Currently, the Azevan team and their collaborators in the NeuroNext network are preparing to analyze the results of the phase II clinical trial.

“This isn’t just about developing a drug,” says Simon. “We talk to patients and listen to their stories, and we hear them asking for help. We need to maintain our objectivity in this study, and we have. While we are currently blind to treatment conditions, the data to date strongly suggest that the drug is well tolerated and safe. We will know about behavioral effects in a few months. I wish we had a cure for Huntington’s disease, but right now this is one way we may be able to help patients and their families.”

According to Simon, the team expects to complete analysis of its topline data by late in the fourth quarter of 2018 or early 2019. “If the data show positive behavioral effects, we will meet with the FDA to determine a path for remaining studies to secure approval. We hope that the HD community will help support our efforts once the results are in hand.”

Lauren Steffan may be among them. Given her mother’s history of HD-induced irritability, she knows what could be on the horizon. A mother of two young children, she says she is doing her best to manage the irritability she already is feeling. “So far, I am handling it well,” she says. “I’m just trying to be a good mom and live my life to the fullest.”

“Participating in clinical trials gives me hope for the future.” -Lauren Steffan