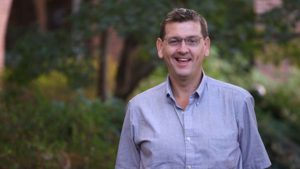 By the time Chris O’Brien was born, his mother was already showing signs of Huntington disease (HD). He was the seventh and last of Alice and Dr. David O’Brien’s children, and like many of his siblings, he was born with a zeal for life.

In his junior year at Yale University, Chris and his father attended a medical meeting on HD, and it was there that he met Nancy Wexler. Dr. Wexler was working with a team of researchers trying to isolate the HD gene in a large family in Venezuela. Chris worked for her for a few summers at Columbia University, and he went with her team to Venezuela several times. On his last trip to Venezuela, there was a coup d’etat and everyone but Nancy left for safety reasons. Chris stayed to help and protect Nancy. “I never really get scared,” Chris said.

Meeting and working with Nancy opened up a whole other world of research to Chris.

“Nancy was my inspiration,” Chris said. “That’s when I decided I wanted to be an MD, PhD and be a neurologist.”

After the gene was isolated, Chris was tested and found out he had the HD gene. Eventually, the family learned that four of the O’Brien children had the gene. Knowing his fate didn’t change Chris’s plans. He was determined to complete his education and training, and along the way, he would also travel the world and climb mountains.

Halfway through medical school, Chris, his father, and his brother Mike climbed Mt. Kilimanjaro in Tanzania. Along the climb, the O’Briens, who are warm and generous people, became close with their young guide. The following summer, Chris went back to Tanzania, worked with the Peace Corps, and reconnected with the guide. At the end of the summer, he brought the young man back to the United States with him. He first stayed with David in the family’s home near Syracuse, NY, but after a few months, he moved to Philadelphia where Chris was attending medical school. (He has since married and has five children.)

That zeal for life also inspired Mike and Chris to hatch a daring plan to raise money for the Hereditary Disease Foundation, which Nancy Wexler’s father founded to help find a cure for HD. They decided to raise $100,000 by climbing Mt. Everest and becoming the first pair of American brothers to do so together. It was the last year of medical school for Chris, but he was determined to both graduate and meet his fundraising and climbing goal.

By the time the brothers made it to the mountain in the spring of 2005, they were still $85,000 short of their fundraising goal, but they were undeterred. Once they summited, they figured the money would come along with the publicity. Unfortunately, while climbing through the Khumbu Icefall, Mike fell into a crevasse. Chris rappelled down to try to save his brother, who was conscious for about 45 minutes but then stopped breathing. Chris and another climber performed CPR on him for two hours until a rescue team arrived from base camp, but Mike was already gone. The New York Times, and newspapers and newscasts all over the world covered the tragedy, raising awareness of their cause and topping their fundraising goal. In the end, Chris and Mike raised $350,000 for the Hereditary Disease Foundation from people all over the world.

Chris graduated from medical school and finished his PhD. He moved to Texas for his residency, but by his third year, in 2008-09, he couldn’t keep up anymore. The symptoms of HD had caught up to him.

“I didn’t think it would happen that early. I thought I would practice for a little while,” Chris said. But ever the optimist, Chris said that he wouldn’t have met his wife, Lili, if he hadn’t gone to Texas.

Chris continues to raise awareness of HD and attended the Huntington Study Group’s annual meeting in 2016, as a neuroscientist. He participates in HD research, having taken part in a trial for tetrabenazine and another for coenzyme Q, and he plans to stay involved.

“There’s always more to be done.”