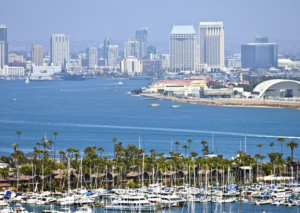 The 2015 International Congress of Parkinson’s Disease and Movement Disorders took place on June 14−18 in San Diego, California. Despite some less-than-sunny weather, the congress offered some bright glimpses into the next decade of HD research and therapeutic development.

This year marked the 25th anniversary of the MDS International Congress. In a therapeutic plenary session on the first day of the meeting, Dr. Ira Shoulson (see HD Insights, Vol. 9) discussed the great increase in attention paid to HD, demonstrated by the number of sessions and posters presented at this meeting compared with the first Congress 25 years ago. Highlights of these sessions included a video course titled “What if it’s not Huntington’s disease?”, a session on “What’s new in Huntington’s disease?”, and a guided poster tour focused on “HD and other choreiform disorders.”

In their video session “What if it’s not Huntington’s disease?” Drs. Anne-Catherine Bachoud-Lévi and Joaquim Ferreira guided attendees through an impressive series of video clips demonstrating common and uncommon presentations of HD, as well as other movement disorders often confused with HD. The presenters emphasized the importance of distinguishing generalized chorea from other movements, along with the necessity of recognizing less common presentations of HD. As a reminder that clinicians may see movement disorders where there are none, the presenters also threw in a video of a normal patient, asking the audience first to identify her diagnosis and the “abnormalities” observable in her facial movements. This fast-paced but enjoyable session reinforced the necessity of not jumping too quickly to a diagnosis for the practicing movement disorders clinician.

The “What’s new in Huntington’s disease?” session covered the most recent developments in HD biomarkers, basic science, and clinical research. Dr. Ralf Reilmann discussed the current array of biomarkers in pre-manifest and manifest HD and whether these are ready for use in clinical trials. Dr. Michael Levine followed with a discussion of the latest findings in laboratory and animal-model research and their influence on the development of novel therapies. The session concluded with an update from Dr. Cristina Sampaio of CHDI on the latest in disease-modifying and symptomatic treatments currently in development.

The HD-themed Guided Poster Tour highlighted some particularly compelling posters on HD clinical and basic science, as well as the continuing exploration of biomarkers, imaging changes, and their clinical correlates. Poster presenters ranged from well-known clinicians and investigators to PhD candidates, and hailed from Australia, Europe, and North America. Dr. Sam Frank presented the results of the First-HD study, emphasizing in particular the participant reports of improved global impression throughout the trial (see HD Insights, Vol. 10). Also presenting on clinical trials, Dr. Bernhard Landwehrmeyer discussed a recent analysis of data from MermaiHD and HART suggesting that there was no significant increase in adverse events in participants taking anti-depressants or anti-psychotics and pridopidine. Two posters described novel objective measures of HD symptoms, including a shoe-worn inertial sensor tested at Oregon Health and Sciences University, and the use of a Wii balance board to assess HD progression evaluated at UC San Diego. In addition, Dr. Ashwini Rao described his lab’s work evaluating gait modulation as a marker of HD progression. Two Australian researchers each described novel physiological measures of HD − Ms. Lauren Turner presented her discovery of abnormal electrophysiological responses in pre-manifest HD patients, and suggested that these may represent compensation, while Dr. Fiona Wilkes presented a compelling new analysis of IMAGE-HD imaging data showing callosal thinning with HD disease progression.

The 19th MDS Congress provided many opportunities for HD experts and those new to the field to learn about the latest in clinical and scientific understanding of the disease and its treatment.
Abstracts from the meeting can be accessed at www.mdsabstracts.com.