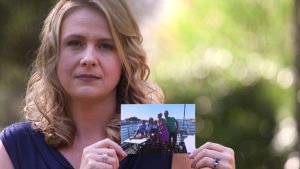 Katie and Mike were friends for years and then in college, something clicked. They fell in love. They had a daughter, and few years later, a son. Mike found his calling and became a Sheriff’s deputy. Life fell into place.

Then Mike’s uncle called. Mike hadn’t been in touch with his father or that side of his family since he was very young and had moved to near Sacramento, CA. His uncle told him his father was dying from Huntington disease (HD).

“We didn’t know anything about HD, so I guess ignorance is bliss,” Katie said.

After Mike’s father died, he decided to get tested for the gene. Katie got the results that Mike was positive while he was at an officer’s funeral and wanted to wait to tell him until they were home. When she went to pick him up, he told her he was feeling positive about the results. He was sure he didn’t have it. Katie had to pull over and tell him because she couldn’t hold back the tears until they got home.

It wasn’t long after Mike’s positive test that he started showing symptoms. It started with a finger that wouldn’t stop tapping. Katie didn’t recognize it as chorea at first because what she’d read about chorea was much more significant movements.

Realizing they needed more expert help than their primary care physician could provide, Katie and Mike started seeing Dr. Vicki Wheelock and the rest of the HD team at the University of California – Davis. There, they met Terry Tempkin, who was the clinical project manager. She was helping Mike to enroll in clinical trials, but his behavior was making it difficult. She told him he couldn’t do clinical trials and behave recklessly. 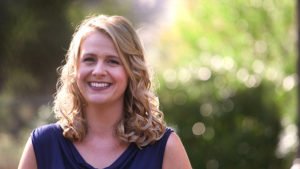 “I always tell Terry that she saved my marriage,” Katie said.

Mike’s behavior stopped, but his movements got worse. Thankfully, tetrabenazine had just been approved. It took three months to get the medication, but Mike was among the first to get it more than a decade ago.

Immediately, Katie turned to advocacy. Growing up with a brother with cystic fibrosis and a mother who worked tirelessly to make sure he got what he needed, Katie knew exactly how to fight for her husband and HD.

“Your power is to fight. You use your voice to tell your story for awareness and education,” Katie said. “You don’t know how strong you are until strength is your only option.”

Katie threw herself into advocacy, finding her way to Help 4 HD International. After years of exponential growth for the organization, she is now its president. Help 4 HD has taken on law enforcement education, ensuring officers understand HD and how its symptoms can put people with HD in precarious situations with law enforcement and how they can diffuse situations. Help 4 HD also fundraises for Juvenile HD, which is incredibly rare and gets little funding from private companies and the federal government. It is a communications partner with Huntington Study Group, helping HSG get the word out about its clinical trial opportunities. Katie hosts Help 4 HD’s weekly blog radio broadcast on topics ranging from long-term care and homelessness to basic science.

For her own family, Katie advocates participating in research. Mike has been in many observational and clinical trials, including ENROLL, Pre-CELL, CoQ10 and COHORT. And her kids have participated in HD Kids in Iowa. Katie said families are important for research and points to the polio epidemic.

“Can you imagine if the families didn’t fight it? AIDS, too. When you have strong advocacy, you can make a real difference,” Katie said. “What would research do without patient advocates? There would never be an FDA-approved drug.”