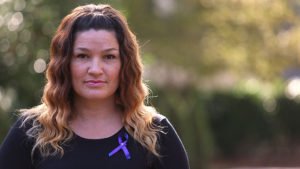 No one talked about Huntington disease (HD) in Katrina Hamel’s house when she was growing up. No one told her that her grandmother took her own life because of it or that there was a biological reason for her mother’s anger.

Katrina didn’t hear about HD until she and her brothers moved out and her mother, Allyson, moved from California to Connecticut with an abusive boyfriend. Katrina’s father told her that Allyson knew she had the genetic disease in her family, and she was sure she had it. Katrina couldn’t ask her about it because once Allyson got to Connecticut, she disappeared.

Years later, in 2003, Katrina heard her mother was back in California, pregnant and homeless. Although she was still angry at her mother, she wanted to help, so Katrina who was also pregnant, took in Allyson. Katrina had done some research on HD, but she didn’t find much. Her mother’s behavior was startling.

“It was a really crazy six months,” Katrina said. Katrina was working, running a household, parenting her daughter, and caring for her pregnant and ill mother. Katrina delivered her son, and two weeks later, her mother gave birth.

Allyson’s boyfriend came back and took her and Katrina’s half-brother back to Connecticut. Allyson was supposed to get in touch once they got back there, but like last time, her mother disappeared. Katrina decided to get tested, and she found she doesn’t carry the gene.

Six years later, Katrina, who had been searching for her mother for three years, found Allyson in a homeless shelter in Connecticut. However, the shelter couldn’t provide the level of care she needed. Allyson couldn’t shower or keep herself clean and the shelter didn’t have a medical bed. Katrina found out that her half-brother had gone into foster care and was eventually adopted. After several days of working with the shelter, Katrina connected with a retired airline worker there who volunteered to fly with Allyson back to California.

When Katrina last saw her mother, Allyson was functional and she didn’t have noticeable chorea. Most of her HD symptoms were behavioral and psychiatric. The formerly athletic woman was in a wheelchair when she came off the plane.

“She looked like a homeless person. Her hair was matted. She was emaciated. She smelled of nothing but urine,” Katrina said. “I couldn’t believe what was in front of me.”

Katrina took Allyson home and set her up in her older daughter’s room. She cut off the helmet of hair matted to her head, and to Katrina, her mother seemed happy to be back with her family. It took a couple weeks for the family to see the toll HD had taken on Allyson’s personality and her ability to withstand visits, noise, and spontaneous outings that come with living with a young family. She would get overstimulated and angry. They learned to keep things quiet and predictable. 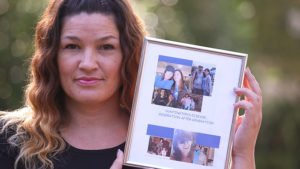 Allyson was able to use a walker to get around in the house, and although she could feed herself, there was a lot of spilling. Her smoking habit got dangerous, setting her hair on fire several times. They moved to a larger house and gave Allyson a sunroom, which had a door that allowed her to go outside to smoke. Katrina lined the bottom half of the walls with plastic so they could easily clean up after meals. They covered her mattress to protect it from urine and set her up with a bedside commode.

Although Katrina worked in homecare, many of the safety issues HD presented were new to her. She waded through them, using trial and error to provide what Allyson needed. Even still, it was hard to avoid injuries, and Allyson refused to see a doctor. Katrina recalled that her mother once fell and hit the table, which was well padded, but it still cut her ear lobe badly. She wouldn’t go to a doctor and wouldn’t let Katrina call 911. Even if Katrina did, Allyson could refuse care.

“I was literally left with super gluing her ear back together,” Katrina said.

Katrina tried, several times, to call Adult Protective Services on herself, just to get some support and relief, but it never worked. “It was just me and my husband. I never had resources.”

Allyson got weaker and weaker. The happiest times for her was when her social security check would arrive and Katrina would take her to spend it. Allyson would get snacks and Jack in the Box and eat and eat and eat. But after an altercation while out, the police called in the mental health care team and took her to the hospital. Finally, Katrina had help. It wasn’t ideal, but it was help.

While staying in a nursing home three hours away, peppered with visits from Katrina and her family, Allyson dwindled away to just 80 lbs. Katrina, who was now running a hospice care home, knew her mother needed hospice. The hospice house allowed Katrina to sleep there and care for her mother. Allyson died, just 11 days later, with her daughter, two sons, son-in-law and grandchildren by her side.

After Allyson died, Katrina’s older brother Kevin decided he needed to get tested. Katrina had been juggling so much with her mother’s care, her young family, and her career, she hadn’t seen her brother was already struggling. He was having a hard time keeping a job, his relationships kept blowing up, and he was easily frustrated over the simplest things.

When her brother’s test came back positive, Katrina bawled, but she was grateful that Kevin hadn’t seen the day-to-day struggle their mother had. And his course will be better. Because of Katrina.

Katrina knows home care, hospice, and through caring for her mother, she knows HD very well.

“I do believe some things happen for a reason. I feel like I was set up to be doing what I’m doing now,” Katrina said. “All of these steps led me to be able to take care of my family.”

And she’s not stopping there. While Allyson was still alive, one of the few places she was able to find support was with Help 4 HD. Since her mother’s death, Katrina has gotten progressively more involved in the organization and is currently the Vice President.

In addition, Katrina and her brother have both participated in research as a way to give back to the HD community.

“It definitely makes us feel like we’re contributing in a way we can at this point,” Katrina said. “We leave feeling like we’ve contributed to helping generations after this.”