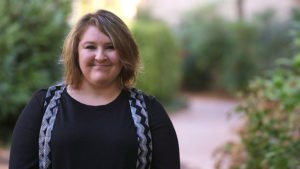 Huntington disease (HD) came into Lauren Holder’s life was she was 15 years old.

Lauren’s grandfather Rose had been estranged from much of his family because he’d been aggressive and because they thought he’d had a drinking problem. Lauren’s parents were the only ones who kept in touch and tried to help him by bringing him to live with them in North Carolina. He wasn’t cleaning; he wasn’t taking care of his dog; and he wasn’t taking care of himself. When he got the diagnosis of HD, everything clicked. His aggressiveness. His wobbliness. His inability to care for himself. It was HD all along.

At first, Rose panicked and tried to run away. He got as far as Tennessee when his car broke down. Lauren’s family brought him home. He tried again and made it all the way to Seattle.

“When he got there, his car was taken away. Dad had to fly out to get the car and drive it home,” Lauren said. Her grandfather stayed in Seattle.

For the next four years, Lauren thought about her grandfather and about her potential for having the HD gene. She couldn’t get the predictive test without having someone in the family diagnosed with HD, but her grandfather was missing and her father, Steve, wasn’t interested in testing. Persistence being one of Lauren’s many strengths, she eventually tracked down her grandfather in a nursing home in Seattle, bedridden.

Lauren got her test, which was positive, and continued to call out to the nursing home to check on her grandfather. She always got a generic update, that nothing had changed and Rose was fine, until one time, a nurse told her plainly that her grandfather was in terrible shape. She made emergency trip out to see her grandfather, fearing it would be her last chance to see him.

“It was pretty scary to see him in the state he was in,” Lauren said. “I was still going through the roller coaster phase after testing… It was really hard to see that because in my mind, that was my future.”

Lauren’s trip to see her grandfather prompted other family members to travel to see him too. They all said goodbye and he died a few months later.

Steve hadn’t been tested by the time Lauren got her test, but he was already showing behavioral symptoms. She didn’t share her results with him until he asked. It took three months. She wanted to protect him because he would have to have the gene for her to have inherited it.

Unfortunately, Lauren’s father was already an insulin-dependent diabetic by the time he was diagnosed with HD, and due to issues with obtaining Medicare, he went without care for two years. His kidneys failed. When his insurance finally kicked in, he started dialysis, and eventually, he got a transplant.

“Anybody would have a hard time with a kidney transplant and it’s been multiplied many times over for him,” Lauren said.

Lauren said that medications transplants require can be neurotoxic, and for father, whose brain was already suffering damage from HD, recovery was particularly difficult. In addition to the physical toll the transplant took on his body, his HD symptoms were worse. His cognition declined and he couldn’t walk anymore. It took a year for Steve to return to his normal self.

“It’s amazing, and I feel like I have a second chance,” Lauren said.

She also puts her seemingly limitless energy toward advocacy and education. She’s an active participant in HDSA, both in North Carolina and nationally. Lauren shares her story openly and talks about how depression and anxiety can drag her down at times and how she pulls herself out of it.

“I am not a quiet person, and I am not the type of person to just kind of sit back. I am not like that in any part of my life, and so I’m not like that with Huntington’s either.”

In addition to helping care for her family and doing advocacy, Lauren is making a difference for HD by participating in all the research she can. She’s participated in ENROLL, COHORT, PREDICT, and a few others. She’s currently participating in a clinical trial, and finds being able to do so is gratifying.

“It’s important to be involved in research, otherwise, we’re not going to find that treatment or that cure,” Lauren said.