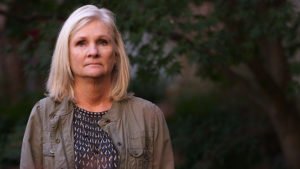 Theresa’s mother was in a car accident near her home outside Atlanta and doctors thought she might have had a brain injury as a result. Eventually, doctors figured out that she had Huntington disease (HD).

The adults in the family had a family meeting and decided they wouldn’t tell anyone outside the family. They turned to prayer for strength.

“It was confusing to us at first,” Rusty said. “We were caught off guard by the information and we didn’t have any idea what this disease was about.”

At the time, Theresa and her siblings didn’t have any desire to be tested. They’d all already had their children and, without a disease modifying treatment, they didn’t see the point in finding out whether they carried the HD gene. Rusty and Theresa’s daughters knew their grandmother was sick and had HD, but they didn’t talk about it. 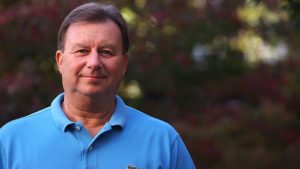 “We kind of lived with that for a while,” Rusty said.

When Rusty and Theresa’s daughter Lacey was about 20, her two sisters started noticing movement issues in her. The family launched into gear. They went through genetic counseling and Theresa had the test done. It came back positive with 40 CAG repeats. Lacey got the test after her mother. Her test also came back positive, but her CAG repeat was 44.

“At the time that Lacey was diagnosed, she continued to work and she didn’t live with us,” Rusty said. “But as things progressed, she moved back home with us. She was still continued to work for a time, but then it became evident that she wasn’t going to be able to do that.”
By her mid-20s, Lacey progressed to the point that she couldn’t feed herself, stand or walk. But her smile is quick and her family is behind her.

“We have a lot of faith in our God and we both have family and friends and friends that are family that are praying for us, supporting us along the way,” Rusty said. They family is also pursuing all treatment options available for both Lacey and Theresa and trust their care teams at Emory and Vanderbilt. 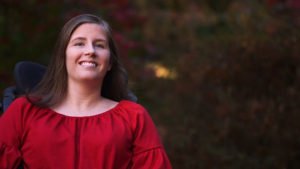 In addition to a combination of medications to help with movement, Lacey also has a physical, occupational, and speech therapist to help her make the best of the abilities she has.

Theresa’s symptoms are very mild and she works in accounts receivable at a local hardware chain, where her coworkers and the owners are very supportive of the family. Rusty said he is blessed to be able to work from home. A caretaker is in the house during work hours to care for Lacey, but Rusty is nearby to assist, if need be.

“God’s taking care of us. We’re in this situation and He’s providing for us; He is walking through it all with us” Rusty said. “I know what we have had as far as people reaching out, praying for us, supporting us, I just don’t know how people without that can deal with it.”

March 16, 2017 0
I am the DIFFERENCE By the time Chris O’Brien was born, his mother was already showing signs of Huntington disease…
Previous Post
Next Post