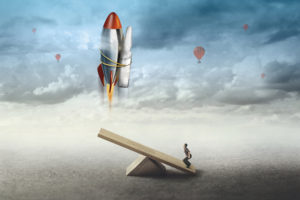 A PRIMER ON GENE THERAPY

Gene therapy targets nucleic acids, the building blocks of DNA and RNA which encode the “instruction set” for proteins that make up our cells and body. Gene therapy holds amazing promise of novel treatments and even possible cures for many devastating diseases, including Huntington disease.

Manipulation of our genes and their products can take place in several ways and at different levels, and depends heavily on the type of genetic defect. In some disorders, a genetic defect, or mutation, results in decreased expression of a protein or one that is mutated and no longer functions properly. Such a defect results in a relative “loss of function,” and theoretically can be ameliorated by introducing a genetic therapy that replaces the affected gene with a functional version or introduces another disease-modifying gene.

In contrast, some genetic defects result in abnormal, increased expression of a gene and its associated protein, or produce a mutant version of the protein that causes pathology and disease. Such defects are called “gain of function,” mutations and require approaches that silence or knockdown the affected gene, reducing its pathologic effects.

To complicate matters, mixed effects are often observed and researchers must choose different strategies for gene therapy. Strategies include i) gene-editing (such as CRISPR-Cas9), ii) introducing a disease-modifying gene, iii) expressing a functional copy of a defective gene, or iv) silencing/knockdown of a mutant allele using RNA interference (RNAi). Each of these approaches holds promise for many devastating neurological diseases, including monogenetic disorders such as Huntington disease, and even multifactorial disorders that may result from a combination of genetic and environmental factors predisposing for disease, such as Parkinson and Alzheimer disease.

CHALLENGES OF DELIVERING THE MEDICINAL PAYLOAD

Promising new delivery methods are actively being investigated with the goal of providing continuous therapy (or potential cure) with a single administration. These include non-viral delivery vectors such as liposomes, exosomes, and nanoparticles. Each of these provides a simple, safe method of delivering genetic therapy, but are fraught with low efficiency and transient effects, requiring repeated administration and potential risk of immune response.

Recombinant viral vectors are naturally more efficient and can provide stable, long-term expression of a desired gene in the central nervous system. Adenovirus, adeno-associated virus (AAV), and lentivirus have each been used and studied in various animal systems. Of these, AAV has the better safety profile and is non-pathogenic in its wildtype form. AAV also provides higher levels of transgene expression, vector spread (1-3 mm), and longer duration of gene expression, with minimal toxicity. Given these attributes, AAV has thus been used successfully in several neurological disorders including Canavan, Alzheimer and Parkinson disease, and spinomuscular atrophy (to name a few).

AAV is a small, nonenveloped, single-stranded DNA (ssDNA) virus that was first identified as a contaminant of adenoviral preps. It requires co-infection with a helper virus to replicate. The AAV genome has 4700 base pairs (bp) and two open reading frames (ORFs), rep and cap, that are flanked by inverted terminal repeats (ITRs). Rep is needed for replication, transcription, integration, and encapsidation of the virus. The cap ORF includes three proteins that encode for the viral capsid and its assembly.

This simplicity of the AAV genome allows for relatively easy design of recombinant AAV vectors for gene therapy. Between the ITRs, a rAAV vector has a packaging capacity of about 4.7 kb, which is small, but adequate for most genetic therapies (including desired promotor and enhancer sequences). The production of rAAV is simple and typically involves triple transfection of human embryonic kidney (HEK293) cells.

This includes use of a helper plasmid for genome replication and plasmid with rep and cap genes that mediate replication and capsid assembly, followed by purification. Note that rAAV’s do not contain any viral coding sequences, so targeted cells do not replicate or produce viral product.

To date, 12 natural AAV serotypes and over 100 variants have been discovered and isolated from humans and non- human primates. AAV serotypes are determined by the capsid protein motifs. These critically affect capsid-receptor interactions.

Effective viral transduction depends on cell surface capsid- receptor binding, uptake, uncoating, single strand DNA release, synthesis and transcription. Without a helper virus, AAV cannot replicate and typically remains extrachromosomal. Rarely does it integrate, and when it does, it occurs specifically in the short arm of chromosome 19.

Each of the 12 natural AAV serotypes has different properties, but all provide efficient transduction and cellular tropism in the CNS. Multiple comparative studies demonstrate that most newly discovered serotypes are superior to AAV2, which was the first AAV described and used extensively. AAV most efficiently and typically targets neurons with specificity of >80%. AAV serotypes 1 and 5, however, may transduce both neurons and glia, while AAV4 transduces ependymal cells.

Additionally, some AAV serotypes such as 8 and 9 are axonally transported, retrograde or anterograde, and demonstrate trans-synaptic transmission, increasing vector spread. AAV9, in particular also appears to have the ability to cross the blood-brain barrier (BBB) into the central nervous system (CNS) after intravenous injection, providing a potential avenue for peripheral delivery.

of pathogenicity (or immunogenicity), and efficient, scalable methods for vector production and purification. Most AAVs, though some better than others, have the ability to target neurons and glia that are often both affected and play roles in neurological disease, including HD.

Further, multiple studies demonstrate that AAV provides long, stable transgene expression in the CNS. Stable lifelong transgene expression has been shown in mice, whereas in nonhuman primates there is data to indicate stable AAV transgene expression of eight or more years, and 10 years in the human brain. These data suggest that AAV gene delivery has the potential to provide a permanent therapy for disease after a single administration/treatment.

is often delayed and takes about two weeks to reach optimal expression due to second-strand DNA synthesis. One solution is self-complementary AAVs (scAAV) that have double-stranded DNA genome and are transcriptionally active upon decapsidation. However, the double-strand nature of the scAAV vector also limits transgene capacity to about half, or ~2.2 kb. While limiting, this size is still enough for many gene therapy strategies.

Another potential issue is  immune  response. While rAAV are non-pathogenic and do not replicate, the capsid proteins or transgene product can stimulate an immune response, resulting in potential clearing of transduced cells and loss of transgene expression. AAV serotypes with higher expression have been shown to induce more of an immune response compared to AAV2. Further, prior exposure to an AAV serotype can stimulate production of neutralizing antibodies, limiting future AAV therapeutics in an individual.

Off-target effects are also a concern, especially with peripheral or IV delivery, where a vector circulates throughout the body, exposing other organs. When RNA interference is used to knockdown genes, micro RNA (miRNA) is now preferred over short hairpin RNA (shRNA) due to reported toxicity. miRNA’s are expressed at lower levels, efficiently processed, and have no reported toxicity.

AAV has been extensively studied and used in human gene therapy, but historically AAV2 has been the choice for many experimental interventions. Examples

include AAV2 expression of NGF in Alzheimer disease, and GDNF or neurturin (CERE-120) in the striatum, versus glutamate decarboxylase (GAD) in the substantia nigra for Parkinson disease. Intraparenchymal (targeted brain) delivery with AAV2 so far has been the most common and bypasses the BBB, but results in limited vector spread and expression around the injection site. For targets such as the human caudate or putamen, this necessitates several injections.

Increasingly, newer AAV serotypes are being used for neurological disease and have the potential for higher transgene expression and spread (including trans-synaptic) in specific brain regions. AAV serotypes 1, 5, and 8 in particular have been shown to more widely transduce the striatum. Such a strategy is currently being investigated for Huntington disease.

Two recent trials have been initiated employing miRNA to knockdown HTT and utilize rAAV to deliver gene therapy, targeting the striatum. uniQure (AMT-130) is using AAV5. In February 2019, they presented data on minipig striatal injections, demonstrating spread of their transgene to the cerebral cortex and lowered mutant HTT. The FDA last spring granted uniQure FastTrack designation. Voyager Therapeutics, in collaboration with Sanofi-Genzyme and the CHDI Foundation, developed a similar approach (VY-HTT01) for HD, but is using AAV1 for delivery. Preclinical data in mice demonstrated initial safety and efficacy. These studies and ongoing developments indicate AAV as an excellent choice for CNS gene delivery and highlight some of the challenges and future potential for genetic therapy in neurological disease such as HD.

I am fortunate, at the University of Florida, to be part of the studies that explore AAV technologies, and to expand the “toolkit” for developing gene therapies. The studies include characterizing novel AAV capsid mutants, promoters for cell-specific targeting, modifiers to enhance expression, purification and delivery methods. It is a great opportunity to be at the forefront of developing gene therapeutics for both animals and humans, including neurological disease such as Pompes.