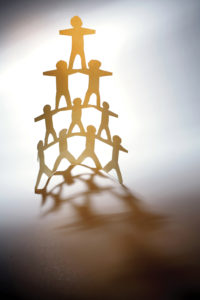 Dr. Ed Wild is editor-in chief of HD Buzz, an online source of research news, written “in plain language” for the global HD community. Since its inception in 2019, Dr. Wild, whose own research has been pivotal in the HD field, has been culling and clarifying HD news for this channel, spreading information and hope. We asked him for his insights on the current scene in the HD youth community.

HD Insights: We see announcements on HD Buzz about “zinc fingers,” new clinical trials and progress in ASO treatment. What recent news do you think might have the biggest impact on at-risk youth over the short term?

Dr. Wild: I think it’s the news that has been coming through, in drips, about the recruitment status of the RUSH generation HD1 trial of the drug RG6042. This is the first Phase III trial of a huntingtin-lowering drug that has ever happened.

We won’t find out the results of that trial for a couple of years, but the trial is recruiting 660 volunteers. This recruitment has been unexpectedly rapid, and in fact, the trial is now fully recruited in the U.S.A. That is a huge testament to the dedication and determination of the HD community, and it also means that the trial will deliver its news, good or bad, in an unexpectedly rapid time frame, which is always good.

That news builds on several decades of successful work showing that lowering the huntingtin protein is possible and can be done safely and effectively in human patients. The question now is whether lowering the protein slows the progression of the disease. That is an answer the community is now going to provide for us in record time.

The bigger picture is that this is one of several huntingtin-lowering approaches, and while it is the one that is closest to success, there are at least half a dozen approaches being tried to accomplish the same thing. These include other ASOs, zinc fingers and gene therapies, so it’s really kind of a diverse set of approaches to a problem that we know to be the cause of HD.

HD Insights: Do you see this news generating a spirit of optimism that wasn’t there one, five or ten years ago?

Dr. Wild: I do. I see it on social media and daily in my work with HD youth. A young person today knows that even if they do have a high HD risk, they may be symptom-free for 20 or 30 years, during which time, who knows what might happen?

And the hope is well-founded. We don’t have an effective treatment for HD yet, but we are delivering on the things we have been promising. Ten, fifteen years ago we promised we would bring protein lowering drugs targeting HD to human trials, and we did that. We promised that we would deliver a drug that would lower the concentration of the protein, and we did that. Next, we promised we would test to see if that drug slows the progression of HD and we are in the process of doing that. And when I say “we,” I mean everyone — patients, families, healthcare professionals and scientists, together.

HD Insights: What can young people do if they want to participate in a trial or otherwise support the progress of HD research?

Dr. Wild: Back in the 90s, the big news was the genetic test, but it didn’t help you either way, you weren’t any further ahead having had the test. Now people are starting to appreciate how much difference actively participating in research can make to their own future as well as the future of the next generation.

And that will have to happen in young people who have had a genetic test, but don’t have symptoms yet. This is probably the next big thing in HD trials. This trial we are currently running is big. The effort to prevent HD will need to involve even more participants, because you need bigger, longer trials to prove that you can delay or prevent the onset of HD.

If young people want to know what to do next, I’d say there are two things. First, if you are not already seeing one regularly, you should see a genetic counselor to talk through the options and talk about how possible future research developments might factor into that.

The other thing is to sign up for the EnrollHD study, which is open to almost all family members and particularly open to at-risk people or people who are pre-manifest, people who don’t have symptoms yet. That is the best way to make sure that any future prevention trial gets recruited as quickly as possible, because EnrollHD is basically the squad from which the trial team will be picked.

The genetic test is part of enrollment, but the results are not revealed to anybody, including the participant or the sites. So the result is used for research but will never be conveyed to the person or the site. If people don’t want to know that status, but want to help with the research, HDEnroll is a great way to do that.

HD Insights: This issue includes an article by Dr. Martha Nance on predictive testing, which is, of course, the elephant in the room in the lives of at-risk youth and their families. What do you see most commonly when young people decide to get the test and learn they are at risk? Do they and their families cope better without the uncertainty? What constructive things do some of them do with the knowledge?

Dr. Wild: We see a wide variety of reactions and that’s what the whole genetic counseling piece is about, sort of giving people time and information to help them make a decision that is right for them.

Generally, people are psychologically better off having the test rather than not having it, and this has been studied, particularly in Canada. A positive test result is obviously devastating news, but it is a piece of information that can help people to come to terms with their future, it can help them plan their lives and decide what positive actions to take. So while it is not right for everyone, the decision to test, on the whole, turns out to be something people are glad they did. Obviously, it is something that takes awhile, and in some cases many years, to reconcile with.

HD Insights: What strategies do you see the at-risk population using effectively to optimize their lives each day?

Dr. Wild: What I have seen in the last 15 years is an absolutely seismic shift in the resources that young people have to deal with, being at risk of HD. And it all comes down to social media. So when I joined HD in 2005, the cool thing that kids did was smoke cigarettes without their parents’ permission. In my first five years, what I saw was that those cigarettes were replaced by mobile phones. And the way kids impressed each other was by having more followers on social media, by having the latest social media app.

As a result of that explosion, Huntington Disease Youth Organization came into being, and the National Youth Alliance in the U.S. has been hugely empowered by that.

Basically, before social media, kids were completely alone and often bullied at school, and really didn’t have any support didn’t know anyone else from an HD family. Now, kids at risk for HD have this huge support network from other kids and other HD family members in a very safe, curated space where families and their kids can help each other and they can engage on their own terms.

Essentially, an atmosphere of isolation and fear has completely transformed into one that is now about positivity, communication and taking specific actions to fight the disease. It’s like the previous generation was tied up and blindfolded and put in an arena with an enemy to fight. And now, the lights are on, everyone has their eyes open, and there are thousands of people fighting the enemy. Clearly everyone in that situation is in a much better position.

HD Insights: How are some of these young people becoming activists for research and better understanding and support for people with HD in their communities?

Dr. Wild: This is huge. On my Twitter feed, and on Instagram and Facebook and so on, I see selfies of young people taking part in research projects. It’s become quite common to see a selfie of someone holding a tube of their own spinal fluid, or having an MRI scan, or at an EnrollHD visit. So social media has encouraged people to turn research into something that, in some cases, is even fun. It demystifies some of the fear that comes with the medical side it and helps to create something whereby research is celebrated and congratulated.

A lot of kids take part in fundraising to help in local research. I also see a lot of young adults who have piercings or tattoos that speak to raised awareness. These might be a DNA strand or a CAG block, or the number that is their CAG count. For these young people, it is partly awareness-raising and partly stamping on their own bodies their intention to fight the disease.