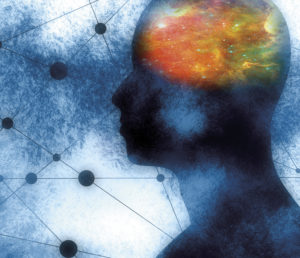 Asked by the HD Insights team to share my perspectives about the uniQure AMT-130 phase I study that currently recruits patients, I would like to start by sharing some history about how we got to where we are now. About five years ago I received a phone call from my colleague and friend Raymund Roos, head of the Huntington Center of the Leiden University

Medical College in the Netherlands. He asked me whether I would be willing to help the gene therapy company uniQure, based in his neighboring city of Amsterdam, to develop a preclinical and clinical program for its virus vector lowering the huntingtin protein (Htt) in Huntington disease.

Just a few weeks later we had a first meeting at the George Huntington Institute (GHI) in Muenster, Germany (www.ghi-muenster.de), which is located only a two hour drive from Amsterdam. The uniQure team shared their data on the AAV-5 virus vector program, named “AMT-130,” that was obviously able to reduce Htt production in preclinical studies. Data from cell and animal studies suggested that the delivery of the virus vector to the brain was reliable and safe. Brain cells reached by the vector would likely be able to reduce huntingtin production for life — with just one intervention!

This was an exciting perspective. However, in order  to deliver the treatment, we were challenged by the necessity of a neurosurgical intervention. Luckily, welearned that after precise positioning of the target regions in the basal ganglia by magnetic resonance imaging (MRI), it is possible to define safe trajectories for stereotactic delivery of the virus via a tiny catheter. This avoids damages to vessels or functionally important brain regions.

The field has gained experience with similar neurosurgical procedures in HD patients receiving deep brain stimulation, (e.g. in the study “HD-DBS” (NCT02535884)), coordinated by my colleague and collaborator Jan Vesper, a stereotactic neurosurgeon from Duesseldorf, Germany. In addition, stereotactic neurosurgery was successfully conducted for deep brain stimulation and gene therapy in a large group of patients with Parkinson disease. In fact, precise delivery of a vector to the individually predefined target regions in the brain can be observed live during the operation, using intraoperative MRI monitoring.

So, after intense discussions with Jan Vesper, who now is in charge of overseeing neurosurgical procedures in this study, and other leading colleagues of the international neurosurgical community (including Paul Larson interviewed in this issue), we were convinced that the challenge of virus delivery can be managed with acceptable low risk.

Another issue of concern was the question of whether the virus vector would distribute in the target regions of larger brains, and whether it would reduce the

mutated huntingtin (mHtt) in a relevant way. This was actually one of the reasons why uniQure had reached out to GHI: in collaboration with Jan Motlik and his team at the Czech Academy of Sciences, we had worked several years on phenotyping minipigs transgenic for HD with MRI, motor, cognitive and behavioral tasks developed in GHI’s large animal unit. Minipigs have a notably larger brain than rodents and a body volume and genetic background very similar to humans.

The uniQure preclinical team around Pavlina Konstantinova, Melvin Elvers and Astrid Vallès-Sanchez therefore decided to perform minipig studies to assess the distribution of the AMT-130 virus vector, its ability to reduce mHtt production, and its long-term safety. Several studies using the minipigs were successfully conducted by the study team in the following years, and some are still ongoing.

These studies helped us to ascertain and understand the distribution and efficacy of the vector in larger brains. Results were shared at multiple meetings and are, meanwhile, partly published. Distribution in the target areas and reduction of mHTT was confirmed in the minipig brains on the mRNA and protein level, and all studies supported the safety of this novel treatment approach.

In parallel to many years of intense preclinical preparations, we prepared the transition of this treatment approach to human patients. Our first expanded advisory board meeting with colleagues from Canada, Germany, the Netherlands and the USA was conducted at GHI in the end of 2016. Multiple meetings with various experts from the Huntington Study Group (HSG), the European Huntington Disease Network (EHDN) and beyond, followed, until the protocol for the currently recruiting clinical trial was finalized.

I thoroughly enjoyed the open communication between all parties involved and would like to acknowledge the intense assistance this project has received from different stakeholders.

As an active member of both the executive committees of the HSG and EHDN, I very much enjoyed facilitating the development of the protocol and study set-up in the community. This includes the feedback and support we received from patient organizations such as the Huntington Disease Society of America (HSDA), the European Huntington Association (EHA) and the World Huntington Association (WHA).

This study is an excellent example of the efficient collaboration in the global HD community. Accordingly, I was met by an enthusiastic response from Vicki Wheelock, chair of the HD Center of Excellence at the University of California in Davis, when I asked her to join me as co-global coordinating principal investigator of this study.

As usual in our community, we had a long-standing track record of interactions and collaboration in previous projects, which facilitates close collaboration and efficient decision-making in guiding this trial. This also holds true for all local PIs of the referring HD centers and their teams — knowing each other and having worked together before is very helpful in such projects, which are truly joint efforts of a large group of professionals with various backgrounds, that require multiple levels of interaction.

This first-in-man study with AMT-130 primarily aims to assess the safety of this novel treatment approach. Unlike many studies with classical small molecules, this study hasmultiple layers. Safety in this study will need to be looked at with respect to the neurosurgical intervention, but also with respect to long-term safety of the virus vector application. Given the special nature of this intervention, with the potentially lifelong effect of the virus vector, it seemed ethically mandated to do our best to follow patients for long periods. We also knew it was important to explore efficacy signals in this patient cohort, which is not traditionally done in phase I studies.

While the study itself will last 18 months, we will conduct structured long-term follow-up of patients for five years. uniQure’s clinical/medical team is committed to applying the best available clinical trial endpoints to ensure optimal characterization of the patients included in this unique study.

Assessments include the Unified Huntington Disease Rating Scale Total Motor Score (UHDRS-TMS), MRI, the objective Quantitative-Motor assessments (which previously demonstrated lack of placebo effects and high sensitivity), the computerized HD-Cognitive Assessment Battery, and other standard assessments for different symptom domains of HD. All of these were widely tested in biomarker studies and HD clinical trials.

In order to obtain clinical readouts in a randomized, double- blinded setting, a sham group was introduced in this trial. Some patients will not actually receive the treatment, but just a borehole and anesthesia at similar length as those participants receiving the virus. Multiple biomarkers, such as the mHTT concentration in the cerebrospinal fluid (CSF), will be measured at different time points to monitor effects of AMT-130.

THE NEW PIONEERS IN GENE THERAPY

Does this mean we are finally “going to the mattresses” in the fight against HD? It sure means we are entering a new era — gene therapy is now being evaluated in HD.

We may assume that delivery of the treatment in predictable doses to the target region is more reliable via stereotactic delivery than through delivering antisense oligonucleotides (ASOs) to the cerebrospinal fluid by repeated injections into the lumbar region. If successful, the AMT-130 treatment may last a lifetime after just one injection.

While preclinical studies in animals, including non-human primates and minipigs, supported the safety of this approach, long- term safety of AMT-130 in humans has yet to be demonstrated. The non-allele specific reduction of the Htt protein, (i.e. reduction of the healthy and mutated protein, which has shown to be safe in the previous IONIS trial using ASOs), will be assessed in this trial for longer periods.

The patients and families supporting this trial are pioneers and certainly “go to the mattresses” for people at risk for HD. One may also view them as astronauts for HD. They help to answer very important questions so that we can progress toward meaningful therapeutic options for HD. The whole study team looks forward to learning from this trial and sharing the results with the HD community in the near future. 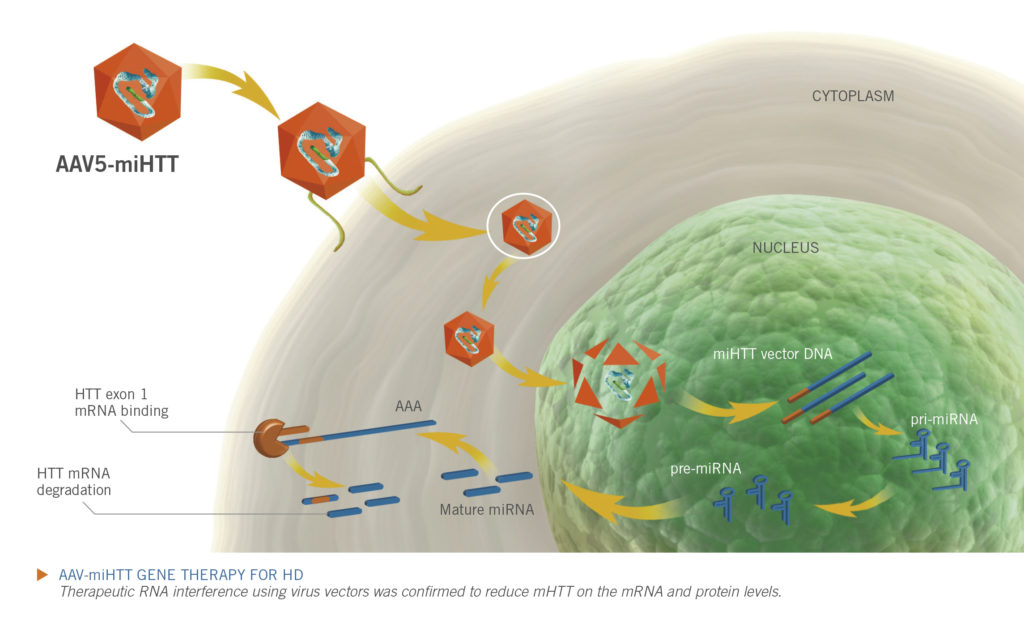