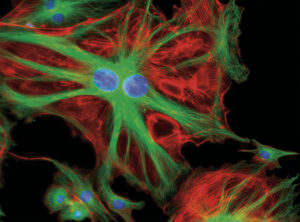 1 – Silencing Huntingtin as a Therapy

Silencing huntingtin (Htt) is currently the most promising therapy for Huntington disease (HD) with two phase I/II clinical trials underway. The method used in these clinical trials for silencing Htt in vivo is transient anti-sense oligonucleotides (ASOs) which need to be consistently re-delivered. For constitutive gene therapies, viral delivery and genomic integration of the therapy is required. The efficacy and safety of this approach is currently being evaluated as a strategy for single dose, long term-HD treatment by HD laboratories globally.

AAV5 delivery of microRNA to knockdown Htt (AAV- miHTT) was evaluated for efficacy in neurons and astrocytes differentiated from HD patient-induced pluripotent stem cells (iPSC).1 In this model AAV5-miHTT successfully transduced and knocked down Htt in both neural cell types. Significantly, this model showed no off-target passenger strand activity, an important safety consideration for moving this delivery method into the clinic.

Caron et al., from the Hayden lab, tested AAV5-miHTT in a humanized HD mouse model.2 This study demonstrated that a single administration of AAV5-miHTT could sustain Htt knockdown for at least seven months in vivo. This therapy is not allele-specific, and this paper specifically investigated the effects of pan-Htt knockdown by investigating the effects in a humanized wildtype model.

This treatment was effective in treating motor and cognitive phenotypes in the mutant Htt model, however there were still motor effects in the wildtype model, indicating that sustained knock- down of wildtype Htt will not be completely tolerated, as was long hypothesized.

Finally, in the Htt knockdown space, the Olajincaz lab produced an RNAi that is potentially effective at knocking down pathogenic proteins in several PolyQ disorders. The group tested short hairpin RNA (shRNA) targeting expanded CAG tracts in fibroblast cells derived from HD, spinocerebellar ataxia 3 and 7, and dentatorubral-pallidoluysian atrophy patients. A universal therapy could be very desirable from an economical and reimbursement standpoint, and should be further investigated. Auspiciously, the group was able to optimize the intervention to have a preference for mutant-expanded alleles over their wildtype counterparts.

2 – Studies on Neural Consequences of HD

In Huntington disease, neurons are the cell type that is differentially lost—specifically, medium spiny neurons (SPN) in the striatum. Therefore, investigating neural consequences in HD frequently takes the spotlight in research efforts.

A report published in Neuron uses unbiased genome genetic screening, using shRNA and CRISPR libraries, in the central nervous system to identify genetic modifiers in the brain.1 In agreement with other studies, the group finds that SPNs are sensitive to perturbations in autophagy, proteostasis, mRNA processing and mitochondrial pathways—processes that support high metabolic activity. Using HD mouse models, the group found that genes that modified mutant huntingtin (mHtt)-induced pathology were in pathways involved in dopaminergic signaling, methylation-dependent chromatin silencing, as well as in genes involved in mitochondrial dynamics (specifically of the Nme gene family).

Another very elegant study published in Cell Reports used the Cre-Lox system to conditionally knockout Htt from either indirect pathway medium spiny striatal neurons (IP-SPN) or direct pathway medium spiny strial neurons (DP-SPN) using the Adora2A-Cre and D1-Cre transgenic mouse models.2 Loss of Htt in different neurons leads to different pathologies. For instance; knockout of Htt in the IP-SPNs results in hyperactive locomotion without loss of motor coordination, whereas DP-SPN Htt loss results in hypoactive locomotion and impaired coordination. The overall conclusion from the paper showed that Htt loss in the striatum reproduces key HD pathologies such as neuronal connectivity and survival in an age-dependent manner. This suggests that Htt-induced pathology in SPN is likely due to a loss-of-function mechanism.

Although SPNs are the primary neurons affected by HD, other neuronal types like microglia are thoughtto contribute to disease progression. Microglia are the immune cells of the brain and consequently would be affected during neurodegeneration, and microgliosis is observed in HD. Inhibiting colony-stimulating factor 1 receptor (CSF1Ri) leads to a complete depletion of microglia from the brain. The Crasper et al. group used the FDA approved CSF1Ri inhibitor pexidartinib to deplete microglia from the brain of the R6/2 mouse model.3 They depleted the microglia at six weeks; this is after development but prior to symptomatic onset in this model. This treatment was beneficial both in motor and cognitive tests, indicating that microglia modulate toxicity in HD.

The normal function of huntingtin (Htt) is still not fully understood, and thus, how it leads to selective pathogenesis is still somewhat of a mystery. Normal mitochondrial function is important in every cell of the body. However, neurons have high energy usage, and therefore unique mitochondrial requirements. Mitophagy is the process by which dysfunctional mitochondria are processed by the lysosome. A recent manuscript investigated how mutant Htt (mHtt) affect the process of mitophagy.1 The group used a differentiated immortalized striatal neuron model and induced mitochondrial depolarization leading to mitochondrial damage, inducing the mitophagy pathway.1 Monitoring mitochondria using cytotracker and inducing mitophagy using Rotenone or CCCP showed impaired mitophagy and an accumulation of damaged mitochondria in the presence of mHtt. This dysfunction was caused by impairing the autophagy initiation complex and led to an accumulation of reactive oxygen species.

Another unanswered question is which part of the Htt protein is required for pathology. Since it is a large protein, there are many fragment models that lead to different pathology and severity of disease. To probe this question using a single model, Dr. Marsh’s group utilized a well-characterized Drosophilia model and inserted different fragments of Htt with different repeat lengths into the same locus.2 They did an in-depth studying looking at the localization and pathology that these fragments cause and at differential pathology in different cell types — neuronal and non-neuronal. In Drosophila full length, mHtt is toxic (whether localized to nucleus or cytoplasm) is not processed to smaller fragments, and its toxicity is independent of aggregation. The group additionally showed that PolyQ alone cannot cause pathology.

On the topic of PolyQ, or the expanded repeat leading to unrelated toxic species causing toxicity, it has been hypothesized that RAN-translation (repeat associated non-AUG translation) may lead to pathology in Huntington disease, and other PolyQ disorders. Yang et al. used CRISPR/Cas9 to make an elegant mouse model to test this hypothesis.3 The model produce Htt mRNA but not PolyQ protein, and therefore could produce RAN translation in the absence of protein expression. The group found no RAN-translated products in any of their mouse models, and found the expression of PolyQ protein to be required for disease. They came to the conclusion the RAN- translation is not involved, or of minimal consequence in the pathology of HD.