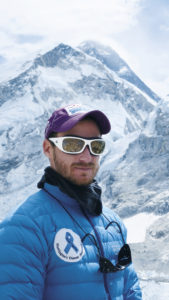 Lysle Turner is facing a breaking point. Up against insanely cold temperatures, devastatingly steep inclines, and pure exhaustion, his body refuses to go on. But Lysle has been here before; he knows what to do. Closing his eyes, he begins reciting some of the 400 names written on the South African flag he carries with him. All are names of people who have passed away; all were lost to Huntington disease. He reflects on those he met before they passed. He reminds himself that this impossible climb will raise awareness for HD, a cause close to his heart. Reconnected to his greater purpose, he heads toward Everest’s summit.

THE SHADOW OF UNCERTAINTY

As a young child growing up in South Africa, Lysle suspected that something odd had happened to his grandfather, who passed away before his birth. His family spoke highly of him and said that he fell ill, but that’s where conversations ended. This piqued young Lysle’s interest, and his questions only grew more frequent. When his uncle began to show signs of HD, his father sat 12-year-old Lysle down and explained that HD had haunted his family for four generations. Of course, Lysle wondered if he and his father would develop HD as well, but there were no answers for him. His father was content not to be tested—to live his life to the fullest without knowing when or how it would end.

So, the young teenager put his own HD risk in a mental box and tried to bury it. Over time, however, not knowing whether his close family would develop HD became less and less bearable: it ran contrary to his nature. He generally coped with difficult circumstances by making plans and taking action. By 22 years old, Lysle was living a successful life by conventional standards: he was trying to make a career out of playing cricket and was gaining ground as a published fitness model (he was Mr. Pretoria 2012). But something bubbling in the background of his psyche couldn’t be contained any more.

Lysle’s uncertainty about his and his family’s HD status contributed to a drastic life change. In his own words, he “ran away” from his previous life: he moved to Tanzania, began a job at a shipping company, and began to fight HD directly. He founded The Turner Together Foundation: a nonprofit dedicated to making a meaningful difference to humanity, to funding HD research, and to supporting families with HD.

To raise awareness, Lysle began to relentlessly climb mountains, from  ascending  Kilimanjaro seven times to conquering Argentina’s Aconcagua, the highest mountain outside of Asia. Teaming up with other organizations to raise awareness through social media, radio stations, TV and word of mouth, his daring climbs—including running up Mount Kilimanjaro in 11 hours— met these goals.

Meanwhile, Lysle told his family that he wanted to know if he was at risk of HD. He trod carefully, as his test results could inform his family of their HD status as well. Despite his personal desires, his father chose to get tested for HD: he wanted to put the question to bed for Lysle and his sister. Thus, it was decided that Lysle’s father would get tested before Lysle would, since the results, if negative, would clear both him and his sister of HD risk.

Their hopes came true: Lysle’s father tested negative, meaning that Lysle’s generation was the first to be safe from the disease. This revelation occurred early in 2015, while Lysle was in the midst of an arduous training process to prepare him to tackle the highest mountain in the world: Mount Everest.

Mid-ascent, a horrific 7.8 magnitude earthquake closed the mountain; massive avalanches buried climbers. 22 people lost their lives, and Lysle and other climbers turned back and rescued those who survived. Despite this traumatic event, Lysle was still resolved to resume the climb.

One year later, he became the youngest person from the African continent to summit Mount Everest. On the roof of the world, with his right eye beginning to freeze, he proudly held up his South African flag. In Lysle’s words, it was a declaration that “HD must be no more.”

Lysle said, “Everest would have died as a dream in a notebook if I didn’t have this crucible.” Here, Lysle is likening the experience of being surrounded by the unspoken threat of HD to a “crucible,” a severe test that holds the potential to bring out the best in a person. He believes that a positive outlook can help you emerge from a crucible with new strength.

Lysle is very grateful that he does not carry the genetic risk for HD. On the other hand, he believes that without the pain and challenge posed by the disease, his mountain climbs (both physical and metaphorical), unstoppable determination, business success, and recent graduation from Harvard probably wouldn’t have happened.

How did the threat of HD fuel Lysle’s achievement? To begin with, Lysle’s deep desire to belong to a greater community was fulfilled when he decided to take action and seek out the global HD community. “Everyone wants some sense of belonging and wants to help,” Lysle said. By extending his sense of family to include the larger HD community, Lysle found a deep wellspring of power to tap into whenever the going got rough, whether on the mountain or in his business career. He knew that success in either arena meant more funding and awareness for HD.

“In my earlier life, I would only go so far to achieve my personal goals. After all, if I gave up on a goal, I’d only be letting myself down. Now, if I give up on any of my HD-related goals, I’m letting the larger community down — and I won’t do that.”

The sense of duty he felt toward his family and the HD community did not crush him down; it ultimately lifted him up. He turned the emotional pain from his life’s crucibles into fuel for a purpose-driven life. He says with pride, “The sense of responsibility toward the greater HD community isn’t a weight holding me down; it’s the wings on my back.”

WHAT IF YOU ONLY HAD TEN YEARS?

Lysle discovered early on that adult-onset HD commonly begins between ages 30 and 50. Thus, he decided to plan for the worst- case scenario — symptom onset at age 30 — as jet fuel for his ambitions. With this potential deadline on his unsymptomatic life, Lysle planned to climb every “crazy mountain” in the world for HD until his symptoms stopped him. “I prepared as if there might be an early end to my life. My family didn’t like that,” Lysle said with a laugh and a grimace.

When his father tested negative, Lysle’s deadline disappeared. Lysle, now 30 years old, reflects, “Now that I’m on the other side of 30, you know, I don’t know when my deadline will be. So, I kick the can down the road a little bit too much when it comes to making decisions that I used to make much more quickly. It’s a bit of a void. Like, what now? I’m reassessing and seeing where to go from here. But I don’t think I’ll ever reach a place where I’m comfortable with what I’ve done, because I don’t believe that this journey ever stops… in my eyes, it needs to last far beyond when I have left this earth.”

Lately, Lysle’s priorities have been more focused on the business world. Make no mistake, he still lives at full speed: he recently became a Harvard alum while running a holding company of various businesses he founded. Asked what it would be like for him to give up his full-speed pace of living and live a “normal life,” Lysle grins  a bit sheepishly. “It would be like s***, to be honest.”

MESSAGE TO THE HD COMMUNITY

Lysle believes that the idea of setting a mental “deadline for life” could be a useful tool for those not at risk of HD. He says, “Why don’t more of us set a deadline of 30 years old? After all, even without HD, someone could reach 30, walk out and be hit by a car. I wouldn’t have achieved as much in my life without the risk of HD.”

He wants to help others find purpose and belonging by connecting to their own greater communities. He sees too many people work without a sense of greater purpose, putting off what really matters to them for some undefined point later in life.

Lysle ensures that some of the publicity and resources gained from his job are used to combat HD. After he attempted Everest in 2015 and  rescued injured climbers, the  media scrambled to learn about the cause Lysle was fighting for, and ended up publishing information about Lysle’s HD foundation in the process. “If people want to listen to my climbing story, they have to hear about my advocacy work.” He also accomplishes this through speaking engagements, donating all proceeds to The Turner Foundation nonprofit.

“I think that people who directly work to impact HD are amazing. However, you can create your own unique avenue for making a difference. Channel whatever you are good at and enjoy doing. Take action with what you believe you can champion. Connect it back to HD. I urge you to forge into the unknown, take action, and break new ground in your life, because we need more leaders to make an impact on the world.”

Self-care and balance are also part of Lysle’s message. In the middle of his hectic life, he finds peace in his faith and in being alone, especially on the mountain or in nature. He strives to find at least ten uninterrupted minutes every day to re-center and find purpose. In this mindful state, Lysle says, “You’ll know where your heart goes in that time. That might be where you need to channel your energy. We all need our reset so that we don’t lose our way in the process of life. Remember: if we are not looking after ourselves, we can’t look after others.”

THE VALLEY BEFORE THE NEXT PEAK

Although Lysle’s mountain climbing spree has been replaced by a more settled life, he is still driven by his passion to contribute to the world in general and to the HD community specifically, where he continues to find a sense of belonging. He feels that he can

be uniquely vulnerable with people in the HD community who understand what he went through.

Lysle has many more projects in the works: he is currently gearing up to speak at the HDYO International Young Adults Congress in Glasgow, Scotland; in 2020, cameras are scheduled to roll on a movie of his life story; and once the fast-moving commitments in his life slow down a little, he will prepare for another challenging expedition. In the long run, his aim is to create speaking and training programs to help individuals and businesses “take charge of their climbs” (their journeys) and handle the difficult detours that they face along the way.

Like others in the HD community who test negative, Lysle is now staring down uncharted decades of life. Although he knows he is fortunate, living without a deadline is still new territory for him. Luckily, traversing difficult territory is nothing new for this adventurer. Lysle Turner will never stop finding new peaks to climb.