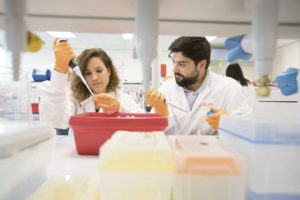 uniQure N.V., a leading gene therapy company advancing transformative therapies for patients with severe medical needs, has announced that the first two patients in the Phase I/II clinical trial of AMT-130 for the treatment of Huntington’s disease have been treated. The Phase I/II study is a double-blind, randomized clinical trial being conducted in the United States, with now one patient treated with AMT-130, and one patient who received the imitation surgery.

“For years, uniQure has had an unwavering commitment to advance this first-in-human AAV gene therapy for Huntington’s disease into clinical testing, and this moment marks an important milestone for our company now that we have two AAV gene therapy candidates in clinical development,” said Matt Kapusta, chief executive officer of uniQure. “With the first two patients treated in this trial, we have taken a significant step forward in advancing AMT-130 closer to our goal of developing a therapy that inhibits the production of the mutant huntingtin protein. We are delighted to be working with leading experts in the field to evaluate this promising candidate.”

The Phase I/II clinical trial of AMT-130 for the treatment of Huntington’s disease will explore the safety, tolerability, and efficacy signals in 26 patients with early manifest Huntington’s disease randomized to treatment with AMT-130 or an imitation (sham) surgery. The five-year, multi-center trial consists of a blinded-18 month core study period followed by unblinded long-term follow-up. Patients will receive a single administration of AMT-130 through MRIguided, convection-enhanced stereotactic neurosurgical delivery directly into the striatum (caudate and putamen). Additional details are available on www.clinicaltrails.gov (NCT04120493).

The first two patients will be observed for an initial period of 90 days, followed by a meeting of the Data Safety Monitoring Board (DSMB). The DSMB will review the data on the first two patients and make a determination about continued dosing of the next patients. AMT-130 is uniQure’s first clinical program focusing on the central nervous system (CNS) incorporating its proprietary miQURE™ platform. “There is an urgent need for disease modifying options to treat Huntington’s disease, and we’re excited to have an investigational gene therapy now available for HD patients,” stated George Yohrling, chief scientific officer and chief mission officer at Huntington›s Disease Society of America. “Based on the promising preclinical data presented on AMT-130 over the years, we are optimistic about its potential to alter the course of this devastating disease.”

uniQure is delivering on the promise of gene therapy — single treatments with potentially curative results. We are leveraging our modular and validated technology platform to rapidly advance a pipeline of proprietary gene therapies to treat patients with hemophilia B, hemophilia A, Huntington’s disease, Fabry disease, spinocerebellar ataxia Type 3 and other diseases.