Brian Beers is the Global Product Lead for Huntington’s disease at PTC Therapeutics, Inc. Prior to joining PTC, he worked on a variety of clinical development programs including diabetes, epilepsy, and sleep disorders. Nearly a decade ago, he got involved in orphan drug research and spent several years working in Duchenne muscular dystrophy (DMD), finding gratification in what he says is a real sense of purpose for the people he serves. “Between the patients, parents and investigators, these rare diseases have very tight-knit communities. It’s a really nice feeling to see what you are doing helps.”

Today, he oversees the trials of PTC518, an oral mRNA splicing modifier now moving into Phase II development for Huntington’s disease. He explains: “There are several ways that we reduce expression of huntingtin protein, and one of them is to reduce the expression of huntingtin mRNA by modifying the splicing mechanism in the cell. That is what we are doing now, using a particular molecule — which we named the PTC518 — to hinder the production of the RNA that enables huntingtin protein to be made.”

“Some of the things that have been done at PTC are transferrable to other rare diseases — the RNA splicing platform in particular,” he said. In spinal muscular atrophy (SMA), the PTC splicing platform was used to develop a disease-modifying small molecule that drove a dramatic change in children’s survival prospects. It was a reversal of the mechanism used for HD — promoting the creation of a protein — that led to successful treatment of the disease. Today, a baby born with some of the SMA subtypes may live many years versus the four to six months they would live without this treatment.

Drugs that must be taken by brain injection or intrathecally need to be placed in direct contact with the cerebrospinal fluid in order to reach their target cells. The PTC518 molecule, on the other hand, can be taken orally because it is absorbed by various somatic cells instead of being broken down and eliminated.

The Phase I trial of PTC518 in healthy volunteers showed high tolerability and a reduction in huntingtin RNA with high specificity, which was a concern the investigators had. In mice and in human cells, PTC518 has demonstrated dramatic Htt-lowering capabilities. “The splicing exceeded our expectations — in Phase I we saw splicing of about 50% from what we observed at the start of the trial (baseline) with 15 milligram dosing, and about 65% with 30 milligram dosing. Next we will look at the percent of the huntingtin protein reduction found in these subjects.”

Phase II preparation is underway and planned to start at the end of 2021. This will focus on safety as well as efficacy, looking at biomarkers as well as impact on cognitive, motor and functional domains. 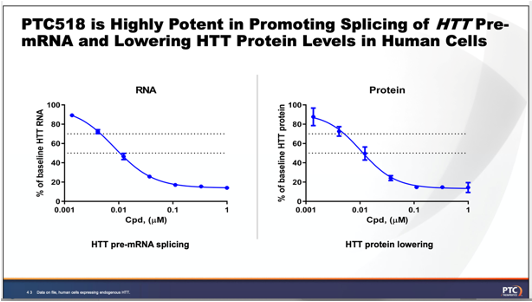 *Roche leads the clinical development of Evrysdi as part of a collaboration with the SMA Foundation and PTC Therapeutics. Evrysdi is marketed in the United States by Genentech, a member of the Roche Group.