A common method of drug discovery is leveraging known and safe drugs and compounds and testing if they have desirable effects in a chosen disease system. Two recently published manuscripts tackle novel drug discovery for Huntington’s disease (HD) using this method, resulting in exciting potential new drugs for treatment.

In one study, a group investigated a large library of compounds, looking for drugs that selectively bind mutant huntingtin (mHTT) and then investigating if this binding has desirable outcomes on pathogenesis in models of HD.1 In the screen, the group identified twenty-one compounds that bind mHTT. After identifying these compounds, a second screen was done on a cellular model of HD to see if cytotoxic effects were decreased. The group found that five of the 21 compounds led to decreased cytotoxicity when cells were exposed to potentially clinically relevant doses of the compounds. Four out of five of these compounds had effects only in cells with mHTT (specific) whereas one drug had effects in cells expressing wildtype HTT (non-specific).

The authors only moved forward with additional studies using the compounds that were specified. These compounds were: desonide, bazedoxifene, loratadine and iloperidone. For the next stage of screening, the selective drugs were used on mouse models of HD to assess downstream effects in a living organism. Desonide outperformed the other drugs in terms of behavioral rescue in HD mice after treatment. Subsequent molecular studies indicated that the mechanism of action of desonide was through allele-selective binding to mHTT, leading to increased proteasomal degradation of mHTT. This may be induced by an increased polyubiquitination of the K6 site on the protein which occurs when desonide binds it. Mutating the K6 site on mHTT abolished the ability of desonide to bind mHTT and therefore inhibits its positive effects.

Desonide is already FDA approved for other uses. Further studies need to be done to assess the proper delivery method of this drug to see if it can be used in clinical trials in HD. 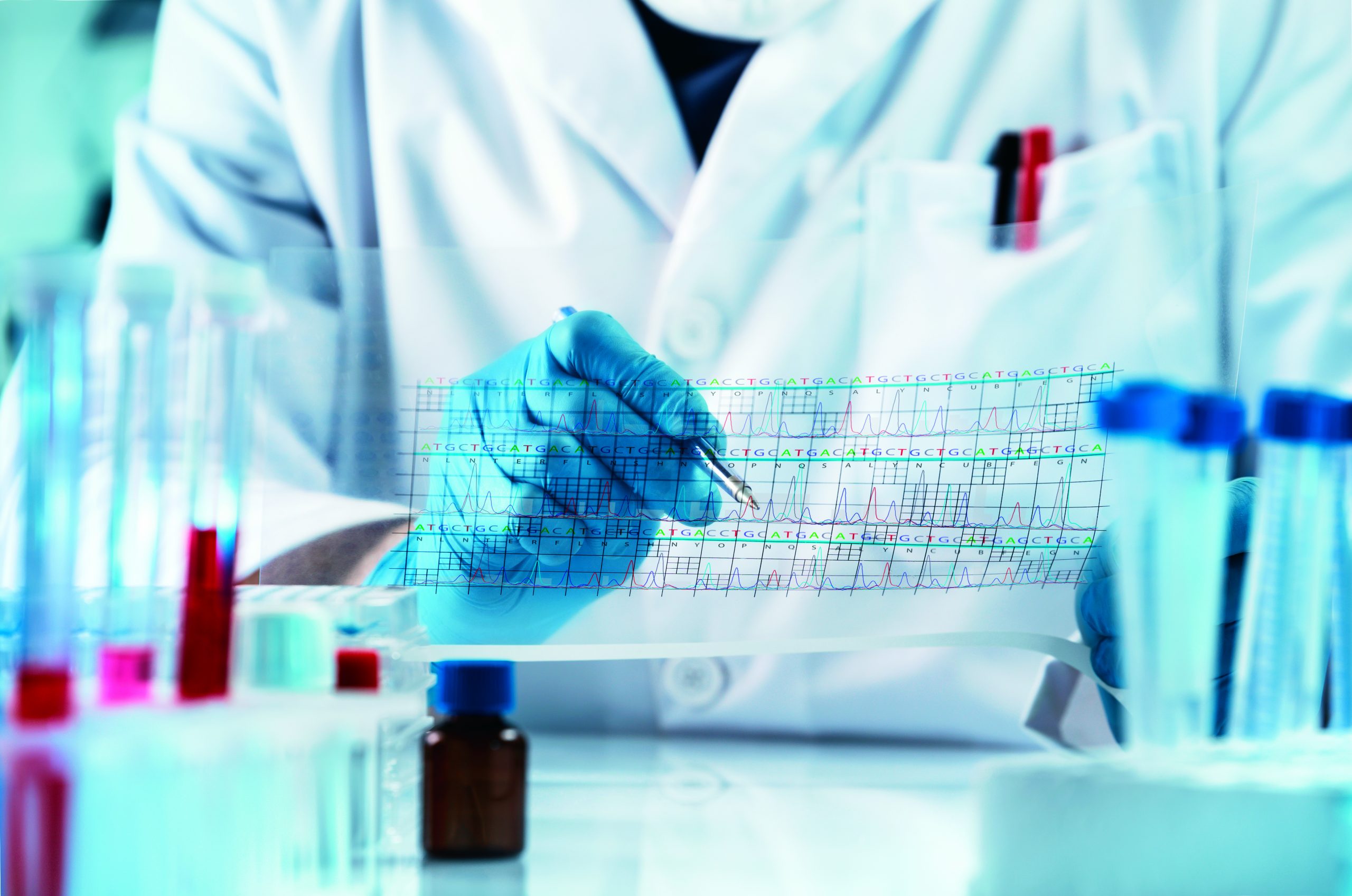 Branaplam – from SMA to HD Applications?

In another study, researchers identified a drug called branaplam as a potential therapeutic treatment for HD.2 Branaplam was developed to treat children with spinal muscular atrophy, and works by decreasing the disease protein levels through altering the gene transcription of the SMN2 gene. Branaplam affects the gene by promoting the splicing in of what the authors call “pseudoexons,” which are pieces of RNA that do not normally, but can, become part of the gene, depending on their pre-existing sequence. The change in the normal genetic sequence caused by the splicing of these pseudoexons generally results in a change in the sequence of the gene leading to its silencing.

While investigating how branaplam may affect other transcripts, using a human neuronal cell-line and a technique called RNA-seqeuencing, the authors identified HTT as a transcript spliced by branaplam. Most genetic changes caused by branaplam appear to be reversible, however the authors found that in this neuronal cell type the HTT gene remained altered even after the drug was washed out of the system, and the alteration led to lowering of HTT protein. The authors tested branaplam in two HD patient fibroblast lines, confirming these findings, and further optimizing the treatment. Ninety-six hours of drug treatment led to a 70% decrease in the mHTT protein level.

The authors then tested the drug in a mouse model of HD that expresses full length human mHTT. Oral dosing of the mice led to the splice variation in the cortex, striatum, thalamus and cerebellum. After a 16 dose regime, the decrease of mHTT detected in the CNS indicated that lowering levels should have therapeutic benefit, and HD mice dosed over time started to show motor improvements.

Authors obtained blood samples from infants with SMA Type I being treated with branaplam, and the whole blood showed a decrease of HTT transcript. Since branaplam is already an FDA-approved drug with the ability to cross the blood-brain barrier, this is an incredibly promising lead for a drug candidate to lower mHTT, which is already thought to be a promising therapeutic avenue for HD. 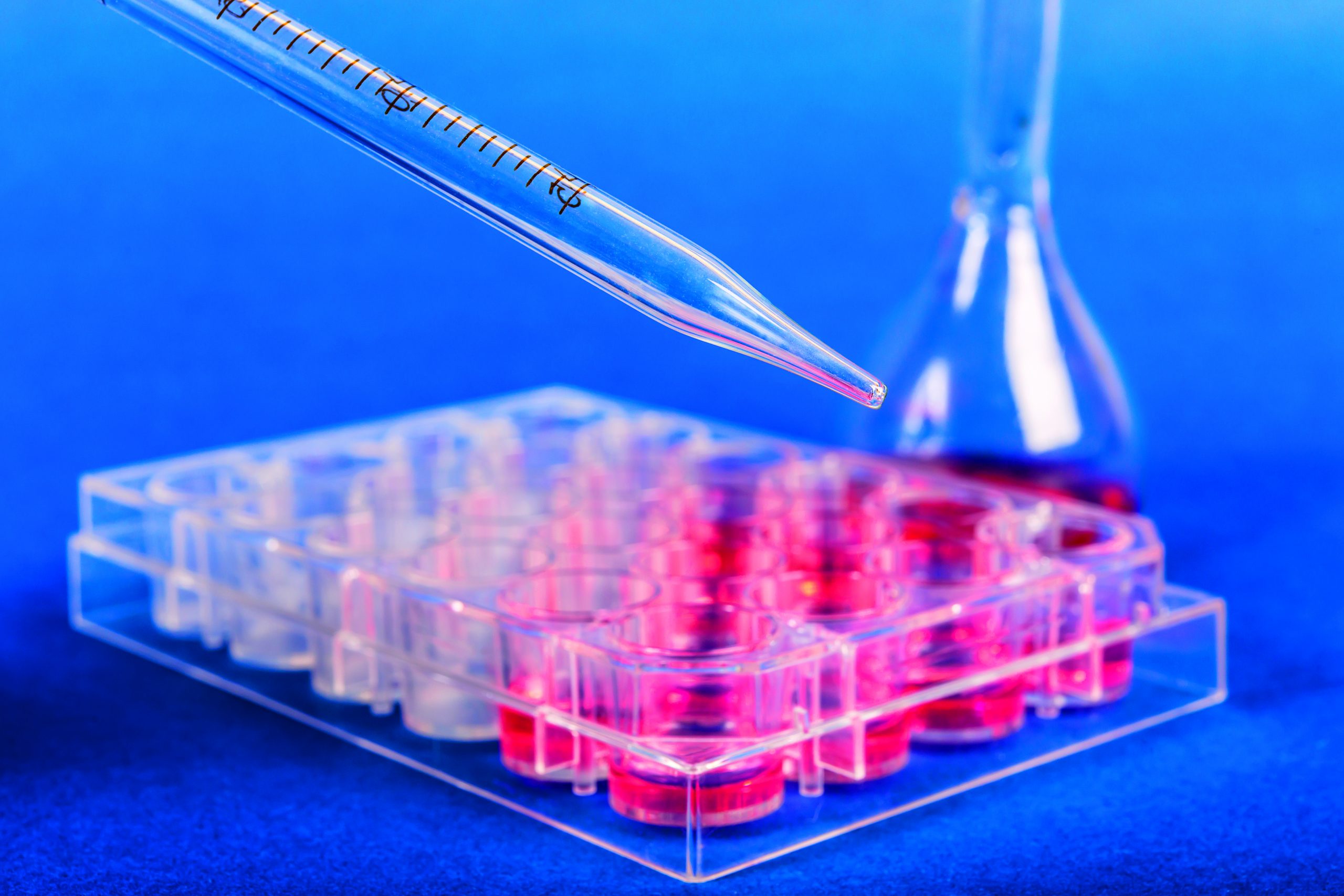 Harnessing the power of regenerative medicine using stem cells is at the forefront of current efforts in many fields of biomedicine. Stem cells are powerful cell types that can become any cell type in the body. Stem cells can come from a human embryo (human embryonic stem cells (hESC). Or they can come from an adult tissue after being manipulated by scientists using a technique called reprogramming, resulting in human-induced pluripotent stem cells (hiPSCs). Using stem cells to replace degenerated portions of the brain is being explored for many neurodegenerative diseases, including Huntington’s Disease (HD).

Because stem cells can become any cell of the body, one group is testing whether directly injecting hESC into parts of the brain that require regeneration would be an effective therapy for HD.1 The group injected hESC into a rat model of HD where viral injection of mutant hungtingin (mHTT) led to site-specific neural degeneration. The group tracked the cells after injection, using magnetic resonance imaging (MRI) and using the contrast agent, superparamagnetic iron oxide nanoparticle (SPION). This is a non-invasive way to track the stem cells over time by imaging the rats at two-week intervals after treatment.
The group found that the hESC transplant improved motor behaviors, and by imaging the cells, found that the stem cells migrated to areas of mHTT-induced damage. Staining of neuron-specific markers indicated that the transplanted stem cells may be differentiating into neurons at the site of damage, which would account for the behavioral rescue the treatment provided. This study proves that stem cell transplants can have the desired positive outcome in HD, potentially even reversing harmful effects after the disease onset has occurred.

There are two challenges with the approach of using hESC to regenerate areas of degeneration in HD. First of all, hESC would come from donor tissue and would likely, in the long term, be rejected by the transplant recipient. This would mean it is either not a long-term solution, or the patient would need to be on lifelong immunosuppressants. The second issue is that delivering unedited iPSC can be unsafe. Not every stem cell will turn into a neuron, but could migrate anywhere in the body and become any cell, include potentially cancerous cells. To avoid these issues, scientists can turn cells from the patient into iPSC, which means the stem cells are their own cells (autologous) so there will be no rejection. Scientists can then differentiate the iPSC into neurons before transplant.

A second study attempts using a different approach: they use iPSC cells that were reprogrammed from HD donor cells, and then differentiate the cells into neural precursor cells (NPC) prior to implantation.2 The problem with this approach is that the NPCs implanted in the brain will still be expressing mHTT, since they came from the HD patient, and would therefore likely degenerate overtime. To stop this from happening, the group aims to silence the expression of HTT in the stem cells prior to differentiating them to NPC and transplanting them in their model system. However, decreasing all HTT expression stops the cells from differentiating into neurons appropriately, so the group had to selectively decrease mHTT. To selectively decrease the expression of mHTT, the group uses the CRISPR/Cas9 technology to silence the SUPT4H1 gene, which is a gene that selectively supports the transcription of long trinucleotide repeats and should therefore, if silenced, preferentially lead to decreased expression of mHTT.

After silencing SUPT4H1 (edited cells) the group found decreased expression of mHTT without affecting wildtype HTT, and the cells could still differentiate into neurons. The group transplanted NPCs that were derived from either unedited iPSC or edited cells into the YAC128 HD transgenic mouse model. They found that when transplanted, the edited cells improved motor function and had an increased propensity to differentiate into mature neurons after transplantation.

This proof-of-concept study furthers the research of using stem cell transplantation to treat HD, with a path forward to transplant NPC-differentiated autologous stem cells that have a decreased expression of mHTT into HD patients. 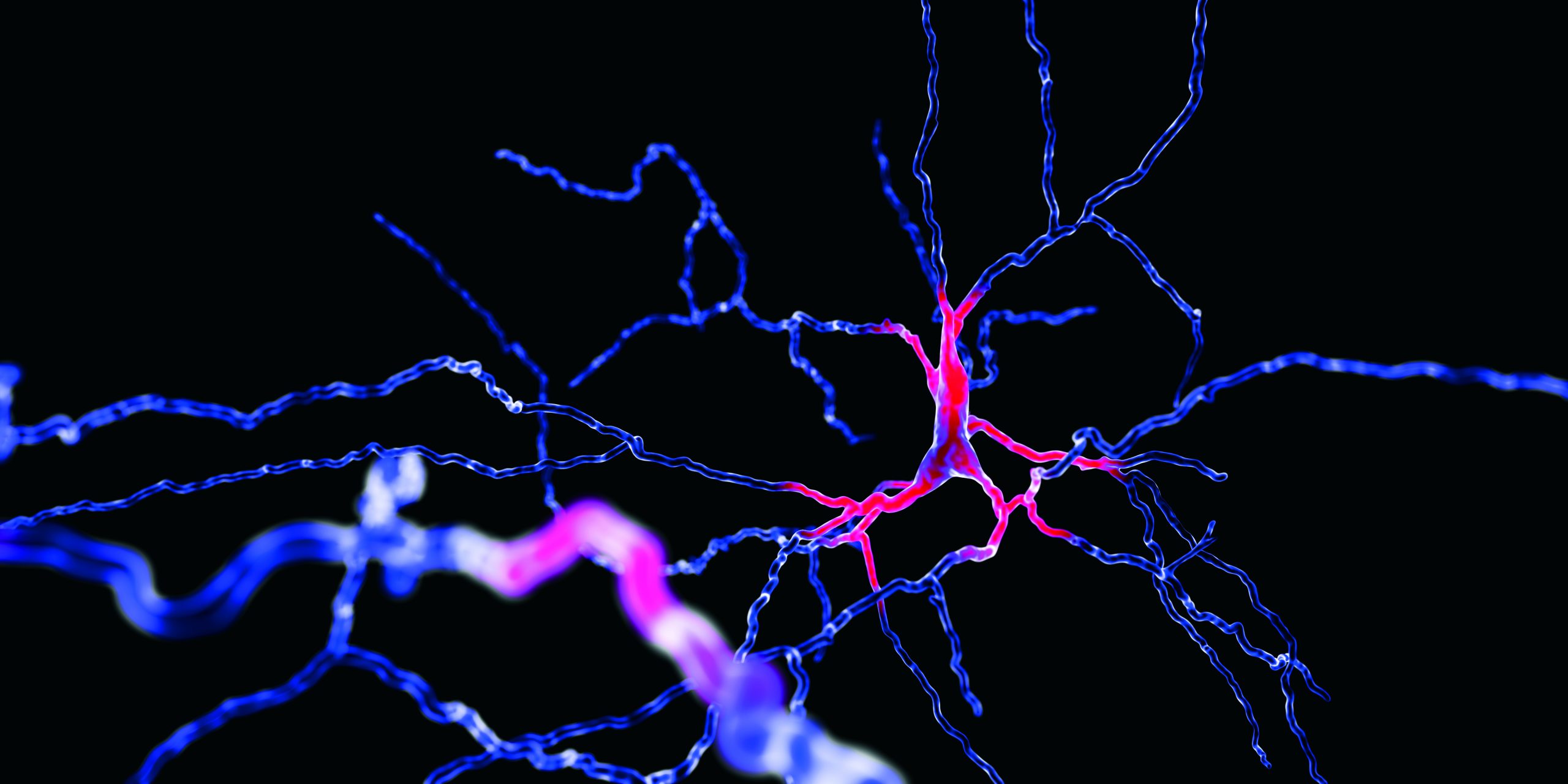 A well-known hallmark of Huntington’s Disease (HD) is the accumulation of the mutant huntingtin (mHTT) protein into aggregates in cell types prone to degeneration. It is hypothesized that the formation of these aggregates may be involved in disease pathogenesis through inhibiting the function of other proteins, altering transcription across the transcriptome, and leading to eventual cellular degeneration. Understanding what cellular mechanisms are involved in the formation of mHTT aggregates and using this knowledge to find ways to break up these aggregates may have therapeutic benefit.

Understanding the molecular mechanisms of proteins involved in the aggregation pathway may lead to cellular pathways scientists can target. Calcium homeostasis is disrupted in the presence of mHTT and a number of proteins involved in the calcium signalosome have been found to be upregulated in a mouse HD model. One of these proteins is call Siah1-interacting protein (SIP). SIP has many cellular functions, including regulation of protein degradation through the facilitation of a molecular signal called ubiquitination. A recent manuscript investigated if SIP has any involvement in the normal degradation of HTT, which is known to have its degradation modulated by ubiquitination.1 SIP has the ability to dimerize, and when it does, it has less of a function in protein degradation.

The authors found that SIP can interact with both wildtype HTT and mHTT. When examining protein extracted from the brains of HD mice, the authors found a four-fold increase in the amount of dimerized SIP compared to wildtype mice.

To see how SIP affects aggregation, the authors switched to a cellular model. They found that when they overexpressed SIP in the cellular model, there was a decrease in mHTT aggregation and an increase in autophagy, a cellular mechanism responsible for degradation of proteins. They then mutated SIP in such a way that would enhance its dimerization and found that when SIP was dimerized, like it is in HD mice, it can no longer function to increase the degradation of mHTT, that leads to increased aggregate formation.

The authors conclude that SIP has a normal function in regulating the levels of HTT in the cell, and the decrease in SIP activity caused by its dimerization in the presence of mHTT leads to mHTT aggregation. They posit that finding a way to stop SIP from dimerizing and allowing it to maintain its normal function (therefore leading to less aggregate formation) may be therapeutically beneficial.

Exploring the Connection Between Aggrephagy and Neurodegeneration

Another recent paper focused on identifying and characterizing proteins that regulate aggrephagy, the process by which the cell specifically degrades aggregated proteins through autophagy.2 Aggrephagy is thought to be affected in all diseases where protein aggregation is involved in pathology, however the mechanisms behind aggrephagy and how aggregated proteins are selected for autophagy is unknown.
The authors in this study used HD models as one of their case studies. Through elegant molecular studies involving the over-expression of mHTT constructs to form aggregates or inclusion bodies (IB), the scientists identified a protein called TriC subunit chaperonin-containing TCP-1 subunit 2 (CCT2), with a specific function in aggrephagy. CCT2 localizes to the mHTT-induced IBs in cellular models. The authors go on to molecularly define how CCT2 functions in aggrephagy, which is different than most classical autophagy pathways.

Other studies have shown a decreased level of CCT2 in HD brains which may contribute to neurodegeneration. Finding a way to increase or stabilize the expression of CCT2 is another target scientists can use when trying to treat HD by increasing the degradation of the harmful mHTT aggregates.